HOW TO PROTECT AND CLEAN
POROUS LIMESTONE SLABS 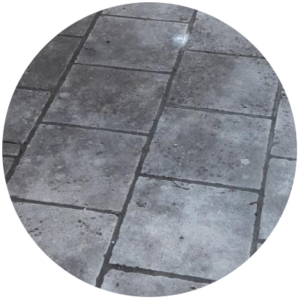 INITIAL STATE OF THE LIMESTONE SLAB

the stone is inlaid with moss and black lichen and urban pollution. 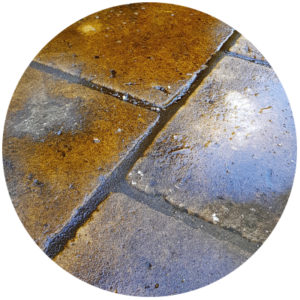 TREATMENT OF THE LIMESTONE SLAB

The application of a Hydro-Mineral RTF CLEANER works immediately and makes mosses and lichens appear discolour. The colour change is caused by the destruction of plant material. 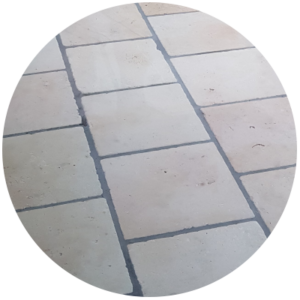 THE STONE RETURNS TO ITS ORIGINAL COLOUR

The paving recovers its original colour, with its shades of pink and beige.
After cleaning the stone has become clean again but remains in a vulnerable state.
A treatment with Hydro-Mineral AS MINERALIZER fills capillary networks to ensure protection against future incrustations and urban grime. 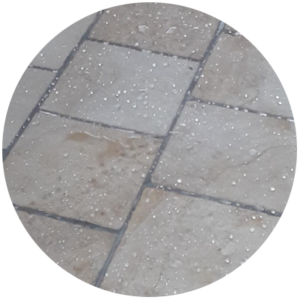 THE EFFECTS OF MINERALIZATION

Mineralization then provides protection against water infiltration into the substrate by blocking porosities.
Without the previous surface dampness and suitable habitats, mosses and lichens will find it difficult to develop again.
Protection also applies against grease stains near the barbecue or incrustation of urban pollution.
The hardness of the stone is also reinforced, giving it a better resistance to wear and tear, to the friction of the tables and chairs that are moved on the terrace.

CONCRETE PROBLEM: HOW TO PROTECT AND TREAT CONCRETE, WHILE PRESERVING ITS NATURAL APPEARANCE

In the La Chapelle district, 17th arrondissement of Paris, the quality of the monolithic concrete is especially noted in the Armand Nouvet Architecture & Urbanisme agency building. This achievement shows that concrete can be protected and treated while preserving its natural appearance.

In order to protect the façade from ageing, climatic damage and various marks  without altering the natural colour of the concrete, the choice of mineraliser was critical. On the Pajol Street construction site, Hydro-Mineral AS MINERALIZER was combined with HYDRO+ MINERAL SUPPLEMENT.

Both of these products combined to facilitate subsequent cost-effective cleaning of the surfaces, protectection of the concrete against wearing, but also against graffiti artists, who like to express their talent. HYDRO+ SUPPLMENT allows a matt or wet effect, and offers different shades, ranging from neutral to light yellow.

Turkmenba Palace is a public building in the city of Ashgabat, capital of the Republic of Turkmenistan, seat of the Presidency of the Republic. Construction was completed in March 1997.

The construction of this monumental building is entrusted to the French group Bouygues, in collaboration with architects from the Turkmen Ministry of Construction and Architecture and the French architectural firms Bellon and Art Études (for interior design).

Mineralization protection solutions have been used on walls covered with Carrara marble slabs, Pyrenean marble columns, and on the plaza covered with granite paving in three different shades, decorated with fountains and water features.